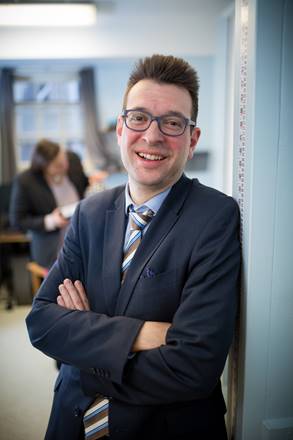 Flavio received a degree in electrical engineering at the Swiss Federal Institute of Technology in Zurich, an International Diploma in electrical engineering at the Imperial College in London, and his PhD in computational neurobiology at UC San Diego. He completed a postdoctoral fellowship at Yale University where he made the breakthrough discovery that the electric fields generated by the brain represent an active neuronal communication mode. In 2011, Flavio moved to UNC to translate this discovery into novel therapeutic strategies for disorders of the brain. Flavio is currently a tenured associate professor in the Departments of Psychiatry and Cell Biology and Physiology. In addition, he is a member of the UNC Neuroscience Center and holds adjunct appointments in Biomedical Engineering and Neurology. He is also adjunct associate professor of electrical and computer engineering at NCSU and adjunct professor of neurology at the University of Bern in Switzerland.

Flavio’s goal is to revolutionize how we treat psychiatric illnesses. His vision is that understanding brain network activity will enable the development of novel diagnosis and treatment paradigms. Flavio is convinced that such rational design of neurotherapeutics will open the door for individualized, highly effective brain stimulation in psychiatry. Flavio is passionate about combining different methodological approaches to scientific problems and is a pioneer in the field of network neuroscience. His research integrates neurobiology, engineering, and medicine. The Frohlich Lab (1) performs computer modeling, (2) combines electrophysiology, imaging, brain stimulation, and behavioral assays in animal models, (3) records and modulates human brain activity, and (4) studies new treatments in randomized controlled clinical trials. Flavio is the director of the Carolina Center for Neurostimulation, which integrates brain stimulation research and clinical care.

Flavio has received funding for his research from the National Institute of Mental Health, National Institute of Neurological Disorders and Stroke, the Brain Behavior Foundation, the Human Frontier Science Program, the Foundation of Hope, and Tal Medical. Flavio is the author of the textbook Network Neuroscience, frequently talks about his work at invited meetings and seminars, and has been recognized by numerous awards, including the NIMH Award for Innovative New Scientists in Biobehavioral Research and a NARSAD Independent Investigator Award. Flavio is also the founder and chief scientific officer of Pulvinar Neuro LLC, a company that provides cutting-edge neurotechnology to brain researchers. You can learn more about Flavio by signing up on his website to receive updates on his research and by following his lab on Twitter.