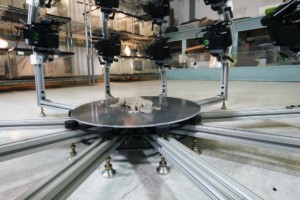 “It is too late for the the Bramble Cay melomys and the Rabbs’ fringe-limbed tree frog—both declared extinct in 2016. It’s probably too late for the Northern White Rhino and the San Cristobal Vermillion Flycatcher, as well. As conservation biologists scramble to head off extinctions, one team of researchers, led by biologist Duncan Irschick at the University of Massachusetts Amherst, is taking a less conventional approach: capturing at-risk species in immaculate 3-D models.

“The basic goals are education and conservation,” Irschick said. “One really big goal is just digital heritage—a lot of animal species are going extinct. Obviously, a 3-D model isn’t going to save them, but it highlights their beauty, gets people excited, and gives conservation groups new leverage to compel people.”

Get the whole story here.

The centerpiece of the initiative, known as the Digital Life Project, is the Beastcam, an arachnoid array of 30 cameras perched atop 10 mechanical arms. When a small animal is placed in the center of the rig, all 30 cameras flash at once, each capturing a unique angle. Independent software then parses those images into a single high-resolution, 3-D model. “You get as good a model as you get photographs, so our approach has been to focus on photography and lighting,” Irschick said.

The current rig can capture virtually any animal between half an inch and six feet in length. But for larger animals, or those living in challenging environments, the array can be adjusted. “We’ve built different platforms for different systems,” Irschick said.” [Source, TheScientist]